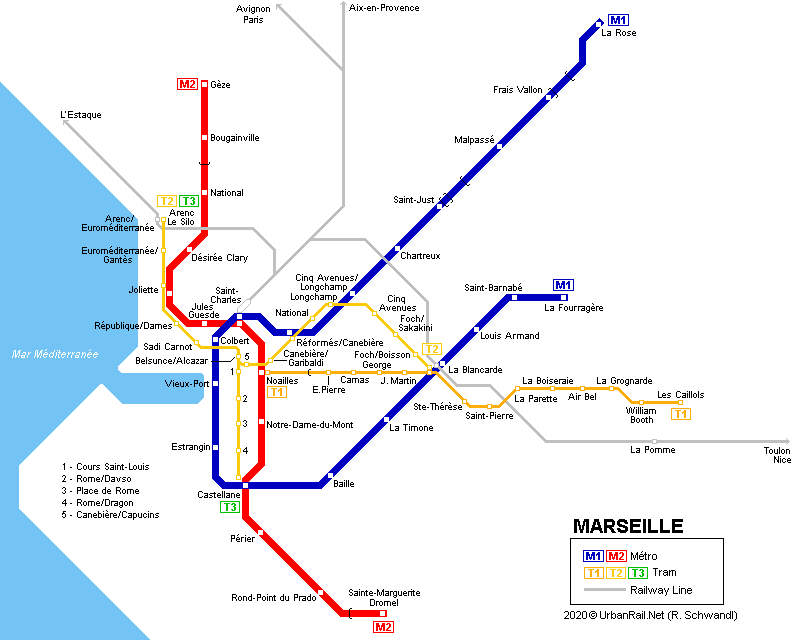 The Metro of Marseille is the metro of the southern French city of Marseille, the second largest city after Paris and also the largest port city in France with a population of around 800,000. The agglomeration comprises between 1.0 and 1.4 million people, depending on the political or geographical delimitation, making it the third largest metropolitan area in the country after Greater Lyon.[1]

The metro comprises two lines with a total length of 22 kilometres and 29 stations. The first of the two lines opened in 1977, the second line was added in 1984. Since then, the lines have been extended several times. After the Paris Metro and only about half a year before the Lyon Metro, it was the second metro in France. A special feature of the Marseille Metro is that it is operated entirely by trains with gas-filled rubber tyres – a system developed on the Paris Metro.

With around 80 million passengers in 2013, the Metro is the backbone of public transport in the greater Marseille area. The Metro thus accounts for about 49 percent of the public transport trips in the region. It has been operated by the Regie des transports de Marseille (RTM) since 1986.

Station of line 2 of the interchange Castellane

There are 29 stations, and their platforms are generally 70 meters long.[1] Saint-Charles and Castellane metro stations function as interchange stations. While at Castellane station both lines cross at right angles on different levels in the form of an L, Saint-Charles was designed as a four-track station – but without directional platforms.

To find out more about conditions, preferential fares and special cases: consult the RTM metro cards.

Subscriptions and rates of the Marseille Metro :

Whether you live in Marseille or are on holiday, find out about the different subscriptions:

The XL Pass permanent is a monthly subscription with a minimum duration of 12 months. Rates:
37.10 €/month for all
18.55/month with reduced transport allowance for an employee
18.30/month for a person under 26, students, apprentices, trainees, apprentices, civic service in the MPM area
18.55€/month for CMUC beneficiaries and unemployed people under 26 who are not paid.
14.70€ Scholarship holders and children from large families

The annual XL Pass is a one-year subscription paid in one go. It lasts 365 days. Rates :

The 30-day XL Pass lasts 30 days from the first validation. Tariffs :
46€ for all
23€ for employees, CMUC beneficiaries and unemployed people under 26
36.70 for young people under 26

You can check all the timetables online on the RTM website in Marseille.