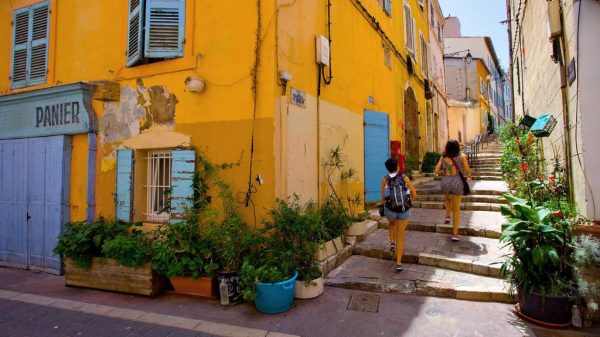 The Marseille Old Town or the Panier district

The Marseille Old Town (Panier) is full of history. It is the last vestige of the old Marseille, with its narrow staircases and its facades polished by time, on which the inhabitants dry their clothes on the strings stretched to the crossing of their window. You can discover this district of Marseille built on the hill of Les Moulins on the site of ancient Massilia in an extended weekend taking advantage of our special deals

The Panier district in Marseille is actually a village in the city … Founded by the Greeks in 600 BC who built here the city of Massilia, this former district has subsequently experienced waves of immigration that have shaped his present face.

A door in the old town of Marseille

The flows of immigrants arriving mainly from Italy and Corsica were quickly replaced by newcomers, coming mainly from South America from North Africa and Vietnam, through the Comorian Islands.

This district of Marseille takes its name from the existence of an old hostel dating from the 17th century located on the current Rue du Panier.

This district quickly experienced a growing economic expansion, thanks to the presence of rich traders who settled here during the 16th century.

Mostly destroyed during the Second World War, the streets of the Cart have kept an undeniable charm. In this old district of sinners, the inhabitants, often of modest origin, knew how to take advantage of their tiny piece of ground.

They were able to build high-rise houses that evoke both the Mediterranean cities of Naples, Catalonia, and others of the same shore, with its entertainment, laundry drying windows, flights of stairs and colorful facades .

High place of struggle for armed resistance during the second world war, refuge for criminals, prostitutes, Jews and communists who all represented a threat to the Nazi occupier, much of this neighborhood was destroyed by the occupier in 1943, which deported on this occasion 2000 of the 30 000 people who were evacuated during a large roundup organized by the Germans.

Assisted in this task by the French authorities of the time who drew up an inventory of the historic buildings to be preserved, the Germans did not hesitate to dynamite not less than 1500 houses in the old town.

Rebuilt after the war by the renowned architect Fernand Pouillon, part of this destroyed area was replaced by tall blond stone buildings of the Pont du Gard, currently bordering the old port, 400m long on both sides of the river. ‘City Hall.

WHAT TO SEE IN MARSEILLE OLD TOWN AND THE PANIER DISTRICT

Without having lost its family and popular character, the district has seen its gradual transformation over the years by attracting a multitude of art galleries, restaurants way guinguette, and shops where artists and painters mix.

The best way to explore the Panier is on foot. A self-guided walking tour is indicated by enamelled lava plates placed in the ground, but it is more pleasant to walk for an hour or two. There is something interesting to see on almost every street.

Without having lost its charm and its authenticity, the neighborhood has seen its gradual transformation into a ghetto halted net by the gradual rehabilitation of its habitat, thanks to operations such as the renovation of the Old Charity.

Dotted with narrow stairs that rise in the old town, you may be embarrassed to visit this neighborhood, in which every street seems to go up!

We advise you to use the small tourist train that will lead you from the old port through the narrow streets of this old district of Marseille.

The Old Charity is the jewel of the old city.

This former hospice, built from 1671 to 1745 on the plans of the architects of the Puget brothers, was listed as a historic monument after a remarkable rehabilitation. Click here to learn more about its history.

The buildings originally designed to enclose the poor of Marseille, are arranged around a central Chapel with the Ovoid dome, surrounded by arcades on three levels built in limestone Cape Crown, whose pink and yellow reflections are revealed in the courtyard that surrounds it.

Some historic buildings, also spared from the destruction organized during the Second World War, deserve a closer look.

This is particularly the case of La Maison Diamantée, which owes its name to its facade of stone carved tip reminiscent of the grounds of precious stones of the same name. Built in the late 16th century, listed as a historic monument in 1925, this oldest communal building houses a magnificent staircase with surprising decor.

The nearby Daviel Pavilion, built in the 18th century, was formerly a courthouse. This annex of the present City Hall is decorated with pilasters, decorated with a wrought iron balcony decorated with daisies, a local motif belonging to the local Marseillaise tradition.

Built in 1535, the Hôtel de Cabre is one of the oldest houses in the Phocaean city. Its composite style shows, behind its facade, unfortunately darkened by time, the late Gothic influence on the architecture of Marseilles. During the reconstruction of the district, in 1954, the house is moved a block and turned 90 ° to enter the alignment of the Grand-Rue. A plaque commemorating this work is currently visible on site.

Symbolizing Marseille and the historic district of the basket, first place of settlement of the city, the church of Accoules remains one of the oldest churches in Marseille. Built on an ancient temple dedicated to the God Minerva, It remains today only the bell tower overlooking an old tower. This bell-tower sounded at the time the tocsin in the city and summoned the Council of City.

The Hôtel Dieu, is an old hospital built in the 18th century on the site of another older hospital dating from the Middle Ages.

Long used as a training center for medical staff, because not planned to cope with the growing medical needs of a population of the galloping city, this former establishment was renovated and transformed into a five-star hotel in 2013, since its purchase by a British hotel group.

The archaeological excavations undertaken during the course of 2010 have enabled the updating of religious remains, as well as a mosaic dating from Roman times, much of which was fully integrated during the renovation of the Hotel, so that visitors can contemplate it on the spot.

The few monuments described above are among the must-sees of the Panier district, but it still has surprises for those who take the trouble to browse it.
This is notably a little known place of this district, the Place des Moulins.

For those who will have the courage to go there (the streets that lead to it are quite steep), this place symbolizes by itself the unknown neighborhood of the Panier; so called because of the fifteen windmills that were used at the time to grind the flour necessary for the food of the inhabitants of Marseille, there remain today only three mills of which only two are visitable.

On this beautiful square lined with houses with local colors nuanced blue, lavender and ocher, walkers will not find something to eat, but can still make a stop in the shade of the tall trees that line this typical square.

Another unmissable place contrasting completely with the previous, the place of the thirteen cantons connects the Place de l’évêché to the rue du Panier. Thanks to the success of the soap opera “Plus belle la vie”, whose setting was largely inspired by this place , this place remains one of the most visited of Marseille by a large part of tourists coming to visit Marseille; the sets used in the shooting of this series broadcast on a large scale in European countries are directly inspired by the eponymous bar that borders this place.

Bordering this same place, the house of the ball is a place inaugurated in April 2015 by the Mayor of the City. At the same time museum whose entry is free, but also shop, this place will allow you to practice to shoot or to point, when you will ask you this ritual question when one exercises with this provencal game.

In the immediate vicinity and possibly located on the place of the old Agora, which would make it the center of this district if this information was verified, the Place de Lenche was built by a former Corsican family who made a fortune in the Coral trade. This square is pleasantly lined with many restaurants, bars, or other stalls that will allow you to enjoy an ice cream or a drink.

How to get to the Panier District

The Panier is a few steps from the Old Port. Take the small train (small tourist train) on the Quai du Port for a guided tour. From Saint Charles train station, take the metro line one (stop: Colbert).

To eat an ice cream: The King’s Glacier (4 Lenche Square) Florence Bianchi returned from Milan to open this tea room -glacier, where it is common to queue for one of its many specialties.

Another very popular place since its opening in 2014 by Nicolas Decitre, former sales manager converted into ice cream, Vanille Noire (13 Rue Caisserie, 13002), promises a nice surprise to its visitors thanks to a black ice cream with vanilla and floral perfume. salt color coal, this recipe kept secret having since become the emblem of the house.

Before you go in search of the cuisine of Marseille, you can start with a short break by drinking a cup of English tea on the terrace of “Cup of tea” (1 Rue Caisserie), both bookstore and tea room. This literary café offers a homemade iced tea that you can enjoy on the large terrace adjoining the beautiful days.

To escape to the heart of the Panier district, try the Café Charité (photo) in the exceptional site of the Vieille Charité, a haven of peace where you can enjoy sandwiches or hearty pasta dishes prepared on site.

Who does not know “Chez Etienne”, the restaurant known to be one of the best pizzeria in Marseille, and whose boss Etienne Cassaro recently died in August 2017. Behind this name, a figure of the Basket, the emblematic boss of a pizzeria where the whole Marseille crowded, for the decor, the atmosphere, the quality of the pizzas. (43 Lorette Street, 13002)

We also advise you to try other places such as “Clan des Cigales” (8 Rue du petit Puits) or “Les Buvards” (34 Grande Rue) between the Old Port and the Panier.